Home > Tax Credits > The Universal Credit: What Will it Mean for Me?

The Universal Credit: What Will it Mean for Me? 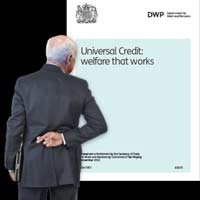 The Universal Credit could mark one of the biggest ever shifts in the history of the welfare state. The introduction of this new system will result in the gradual phasing out of many payments and credits, the names of which have entered the public lexicon.

The government maintains that the Universal Credit will provide a simpler, more effective way of making payments. But critics have suggested that it will result in many people receiving less – despite government assurances to the contrary.

What is the Universal Credit?

The Universal Credit is a government initiative that will completely overhaul the benefits system in the UK. It will replace the existing benefits regime with an entirely new system – a single payment.

The government says the new scheme will be simpler, and that it will help to “make work pay”. But opposition politicians, commentators, and groups like the Citizens Advice Bureaux have warned that it could mean that many people see their payments cut.

What is it replacing?

The government intends that the Universal Credit will replace six separate Tax Credits and benefit payments. It says that there is significant overlap between some benefits – for example between Jobseeker’s Allowance and Income Support. The loss of this overlap is one of the main arguments in favour of the Universal Credit.

Additionally, the government has said that the Universal Credit will be tapered in such a way as to encourage people back into work. Rather than simply losing benefits at certain points (for example when you start a job), the Credit will be ratcheted down depending on factors like income. The government says this will help to ensure that situations in which work appears not to pay are minimised.

When will it come into force?

Provided that it receives Parliamentary backing, the new system will operate for new claimants from October 2013. It will then be rolled out gradually for existing claimants – a process that could take a decade.

It is also worth noting that the passage of the Welfare Reform Bill, which includes the Universal Credit, has been delayed in Parliament.

Will I receive the same amount?

There is significant controversy over the amount that claimants will receive under the Universal Credit system. The government is fond of saying that there will be no reduction in benefits for anyone as a result of the transition. But what they actually mean is that there will be no reduction at the point of transition. So, while payments may remain the same immediately after the change, analysis suggests that many people will be worse off under the new system.

What are the other criticisms?

It has also been suggested that efforts to get people back into work will be ineffective while there are no jobs available. The tapering of the Universal Credit has been broadly welcomed in principle, but many commentators have suggested that government should be considering why it is that wages remain low and work is so scarce, rather than reducing the amount that some out of work people will receive.

Groups have also called on the government to give more thought to aspects of the legislation that they believe have either been overlooked or which need clarification. For example, the CAB want to know whether or not statutory payments like sick pay and maternity pay will be treated as earnings for the purposes of the Universal Credit. This could have a significant impact on the amount that many individuals receive, but it appears not to have been worked through in the proposals.

What about the Enterprise Allowance?

As part of the overhaul, the government also intends to introduce a new allowance called the Enterprise Allowance. This will be made available to those who are out of work, but who are in the process of becoming self-employed.

The Universal Credit could have a major impact on the operation of the welfare state, and on the daily financial lives of people across the country. If you are in any doubt about what it means for you, or about the benefits to which you are currently entitled, you should seek independent advice.